This video is courtesy of leafly.com

Some ingredients can make any food better, and butter is one of them. Whether you have grilled cabbage, Belgian waffles, or you want creamy mashed potatoes, just add some butter, and there you go. Butter has the capability to make any food taste better.

As people have been using weed for a long time now, its consumer market has surged in growth recently. All this while, people have been exploring different things out of it. As a result, some people also tried to pair up cannabis with butter for making weed butter.

Later, it turned out that the flexibility of the butter gives a broad cannabutter appeal. You can use weed butter in almost any recipe that requires butter. Since butter is a kitchen staple, weed butter may lay the foundation of many everyday home-cooked recipes.

Along the way, we’ll answer all your questions and queries on how to make weed butter. So, read on to learn more.

Weed butter, also known as cannabutter, is one of the easiest methods to make infused weed edibles. Having said that, making cannabutter may be a bit of a tricky process.

To make pot butter, you must slowly heat cannabis at a low temperature. This article will walk you through the step-by-step process of making cannabis-infused butter.

To make a cannabutter, you need these ingredients: Cannabis and Butter. But before you begin with the process, you need to activate the THC in the cannabis through heat. This process is known as Decarboxylating.

Here’s how it goes:

Now, mix one cup of butter and one cup of water in a saucepan on low heat. Keep mixing till the butter melts properly.

While mixing, add the ground cannabis and let the mixture simmer with occasional stirring. After 2-3 hours, turn off the heat and allow the mixture to cool down.

Then, strain the mixture through the sieve and refrigerate. You might observe extra water separating from your butter while it’s cooling down. Remove the extra water once it’s all cooled.

This is a simple yet quick way to prepare cannabutter at home. 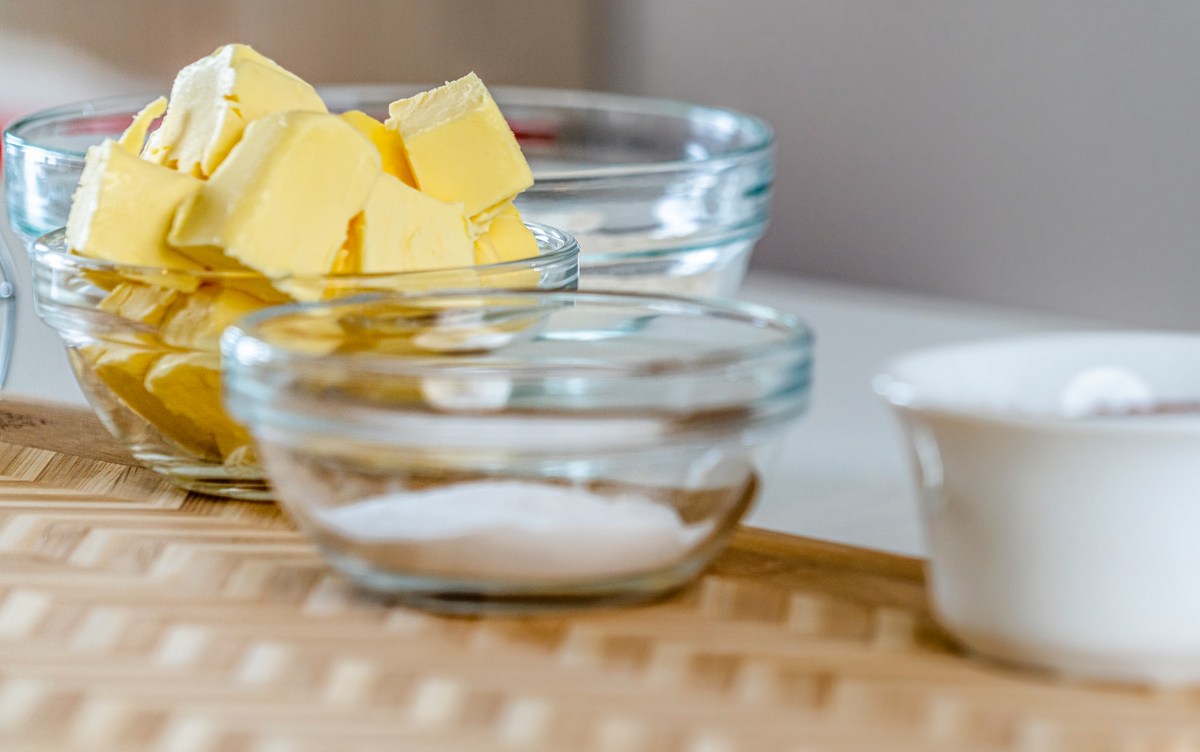 Cannabis-infused butter has the following components and materials: a slow cooker, a cup of water, one pound of butter, metal strainer, cheesecloth, one to two ounces of cannabis flower, and a storage container as per your choice.

Secondly, place the lid on it and cook all the ingredients for 18 hours. To make the weed butter potent, enough absorption of THC is significant.

Finally, isolate the cannabis-infused butter from water, squeeze it, and a stick of butter. It is now ready for use and can be stored in an airtight container. In addition to its use, the Tupperware container separates the butter of the refrigerator in layers.

The cannabutter should be slightly green when in the box that can be used in making cannabis-infused meals.

If you are wondering how to make pot butter using a weed butter maker, scroll down.

Afterward, put the jar in a crock pot, cover it with the lid and cook all the ingredients for at least two hours. Stir the mixture thoroughly after each hour. As the butter is ready, remove the jar from the crock pot and stand weed butter until it is cold.

Marijuana butter maker can make five cups of butter per cycle as it has an immersion blender and a numerical thermostat and heating unit. Likewise, it doesn’t make your kitchen entrap with Marijuana smell.

Now, add the butter and Marijuana buds to the jar and then place them in the crock pot. During cooking, you may feel no smell because a rub gasket is placed on the lid, but when the jar’s cover is opened, you may feel a strong odor immediately that is of Marijuana bud.

How Much Weed Do I Need to Make Butter?

First of all, there is no recommended amount of weed that is needed to make butter. It depends upon how much butter one is going to make. Mostly a quarter ounce of weed is used per stick of unsalted butter.

One gram of cannabis has 150 mg of THC. The starting dose of THC should be 5 to 10 mg per serving. When a person overdoses, it can result in a very unenjoyable experience. So, one should wait at least 45 minutes after the first dose.

At first, be careful as it’s no joke to consume too much weed butter. Always test the butter first, especially if you’re a novice.

Honestly, edibles may be far stronger than any other type of weed. You may consume more edibles but you can’t step back then. A stronger edible dosage can be unbearable as it may last all day long.

On the other hand, straight buds produce strong oil. By and large, the more potent the weed plant is, the more THC and other cannabinoids mix in the weed butter.

If you want the highest potency cannabutter, just add more weed. However, there comes a point when adding more weed won’t help much, instead makes things worse.

The formula to calculate the butter to weed ratio is as follows:

The number of milligrams can a person have in one dose? Commonly a strong is 100 mg. For the average amount, it is 50 mg. One can also use an emulsifier such as Soy Lecithin.

Let’s go hard and say 100mg.2800mg THC / 100mg per edible = 28 edibles.The quantity of weed oil used does not matter in considering the butter to weed ratio.

How to Use Weed Butter?

Butter is something that makes the meal taste better. Weed butter is used as a snack as well as an appetizer. It is used with a dip with baked blue cheese, macaroni, and cheese. Additionally, it is potentially an active ingredient in making pineapple upside-down cake along with brownies and cookies.

This butter is used in the making of Leafy Kale salad dressing. The use of weed butter in making a salad is the most convenient method. Many things use the pulp of cannabis butter, including pesto, sauces, soups, and smoothies, the stew adds flavor to it and makes it enjoyable and delicious.

Moreover, it is used in the processing of bread crumbs and garnish desserts. You can also sprinkle the weed’s pulp over the chocolates. All the recipes made with weed butter, including

Wrap Up with the “Cannabis-Infused Butter”

To sum up, you can learn how to make weed butter at home through this step-by-step guide. You just need a few basic ingredients like tap water, salted butter, buds, and trimmings.

Whether you are an experienced cannasseur or an edible novice, this article offers you the tips throughout for flavor improvement. You just have to make sure that you are dosing carefully.

Consequently, be mindful that 100% conversion to THC is not possible due to the continuous loss during the making of cannabis-infused butter. Make sure to prearrange non-infused meals to munch on after edibles. Also, ensure setting a timer to be aware of the time check.